This post is late for about 10 months now, I’m sorry, but it is better later then never, as the say. On the 15th July of the 2010 we have had a great anniversary throughout the Poland of the biggest medieval battle at the Tannenberg (Grunwald – in Polish and at present maps). This battle, won by the Polish and Lithuanian armies, decided on the future of the Teutonic Order, which has lost utterly, despite great help from the knights from other European countries (mostly Germany).

The biggest event had its place on the fields of Grunwald, in the same place as the original battle. A huge amount of the knights from the reconstruction groups came to Poland, from many European countries, to have great fun and life-time adventure. Despite great summer heats, few thousands spectators appeared on the place to cheer the knights. The only thing that didn’t work well was the organization: huge traffic, no water supplies and overall chaos. But this is war, isn’t it…?

As I couldn’t be there, I gathered some pictures of the event from the web. The most spectacular gallery I could found is on the DEVIANTART website. I have chosen over 70 best pictures from the site, and put it in my faves catalogue. Below is the link to the full gallery and miniatures of the pictures. I won’t post full pictures because of rights to someones hard and good work, so go straight to the gallery and have fun with them! 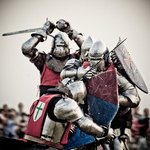