A scholar studying the history of arms and armour in Poland may be easily disappointed. He will find much written evidence of the richness and magnificence of Polish military customs, but this is not supported by adequate material of objects survived till our days. Within one millenium of her history Poland has suffered from wars more than any other European country, and everybody knows that weapons, contemporary or ancient, are always eagerly desired as booty. Moreover, being for a long period in a state of political and economic decline, Poland formed a favourable terrain of exploration for all sorts of art collectors and art merchants from abroad. In fact, to solve some problems we should penetrate foreign armouries and archives as well as Polish.

First of all we ought to realize the specific geopolitical and social, economical and cultural factors that determined military art and customs in Polish history. Poland, looking westward from the beginning of her life as a state, took Christianity from Rome in 966 and developed in the sun of Latin civilization. Nevertheless, even in that early period she remained in lasting, peaceful or warlike, relations with the countries of the East. Poland had to defend her western frontiers against the tremendous pressure of Germany; on the other hand, she opposed the attacks of oriental peoples, the Mongols (13th century), then the Tartars and Turks (16th-17th centuries). Extremely severe wars were led with the schismatic Russia and protestant Sweden. This made Poland a natural friend of the papal policy and of all Italy, fighting against all sorts of «pagans and heretics». At he same time Poland was bound to Italy by ancient cultural, scientific and commercial routes. Since the early Middle Ages generations of young Poles wandered to the universities of Padua and Bologna, then farther to Rome. In exchange a large number of Italian merchants, craftsmen, artists and scholars came to Poland, looking in this cold but vast and fertile country for riches and a new fatherland. Moreover both countries were linked by the same attitude towards the legacy of ancient Rome. The Poles considered themselves real successors of antique culture: it is enough to say that Latin was, next to Polish, the predominant language among Polish noblemen till the end of the 18th century and even later.

In the field of military practice (within the 15th-17th centuries) Poland adopted the European fashion and also the oriental, (chiefly Turkish); above all she succeeded in creating her own fashion with outstanding and original types of plate and scale armour, heavy cavalry pike and battle sabre. Among those different types one could trace some Italian (or ancient Roman) inspiration, but in this article we wish to show phenomena of direct and indirect imports. At the moment it is impossible to provide full documentation and give the exact chronology of the facts; we wish rather to give a general view, illustrated by the most prominent examples.

There is little evidence of Italian objects in Polish hands till the end of the 15th century, therefore we start our survey with he 16th century, when Poland enjoyed a happy Renaissance period under the rule of the kings of the Jagellonian dynasty, Sigmund I (1506-1548) and Sigmund Augustus (1548-1570). The first of those kings, married to the Italian princess Bona Sforza, was a great lover of art and science and the protector of Italian artists. He rebuilt his Wawel-castle in Krakow in the Renaissance style and thus created one of the most magnificent royal residences of modern Europe. Some iconographic monuments, like the mural paintings of Wawel, show the predominant fashion of the Maximilian type of armour in the first decades of the 16th century in Poland, but on the other hand it would be hard to presume a lack of Italian arms and armour in a court where an Italian princess was queen and which was full of Italian people. Sigmund Augustus, the son of Sigmund I and Bona Sforza, inherited the great tradition of artistic patronage and collecting works of art characteristic of the Renaissance rulers. A passionate amateur of jewels and precious textiles, he ordered in Flanders a magnificent series of tapestries especially designed for the Wawel castle. The reports of the nuncios Bongiovanni and Ruggieri, full of sincere rapture, rated the collection of the Polish King higher than the treasures of the Pope and Doge.

The rich armoury of Sigmund Augustus included many brilliant suits of Nuremberg production (among them the work of Kunz Lochner), but it also contained Italian objects. The latter were purchased by the king chiefly in Venice and in Verona, but some of them were made in Krakow by imported Italian artisans. In the financial reports of the royal court we often find the names of Italian armourers and goldsmiths, as J. J. Caraglio, G. de Castellione, A. Marstella, receiving money for different orders, e. g. parade rondaches, decoration of swords and sabres. A great part of the famous royal armoury was taken as booty by the Swedes during the war of 1656. We may see those objects now in the Livrustkammaren in Stockholm; there is also a round shield, «rotella», of leather, with the portrait of Sigmund Augustus between the arms of Poland and Lithuanian, unquestionably the work of an Italian hand.

From the beginning of the Polish State there existed the Royal Treasury, containing the Crown Jewels (regalia), venerable relics, symbols of military power, souvenirs of past glories, and precious trophies. Some of these objects, preserved intact from the turmoils of history, show Italian provenance. Such is the knight’s mace of the 15th or early 16th century, made totally of iron, partly gilded, the head of seven feathers, the handle decorated by vineshot motives (picture 1).

It was not only a dangerous offensive weapon, but also a sign of military rank, a kind of military sceptrum, evidently used in Poland at that period and then honoured by being deposed in the Treasury. It is worth mentioning that the commander staff with the orb head (the Persian-Turkish type adopted also by Hungary) predominated in this country after the half of the 16th century. Another Italian object which has survived from the days of the Treasury is a linstock, exceptionally rare and beautifully decorated; it was undoubtedly a mark of the commander-in-chief of the Royal Artillery (picture 2). 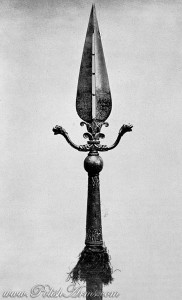 The insignia of Sobieski belong now to the State Art Collection at Wawel. The sword presents a superb example of the late baroque style. On the blade, amidst rich ornamental foliage, we read the following inscriptions, on one side: INNOCENTIUS XI PONT MAX PONT SUI A I, on the other: INNOCENTIUS XI PONT MAX A MDCLXXVI. The pommel bears the arms of Altieri, attributed to Pope Klement X, and the belt the arms of the Odescalchi. the family of Innocent XI (picture 3). 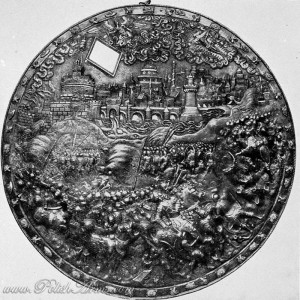 This incongruity may be explained by supposing that the sword was ordered by Klement X, then prepared as an offering to Sobieski by Innocent XI in 1676, but it eventually reached the king (by nuncio Pallavicini) only a year after the victory at Vienna. The documents cited by Modern reveal the practice of alteration or even of a complete change of dedication in the rendering of the insignia.

The hat given to Sobieski is also of the highest interest: made of dark violet velvet, bearing on the top an embroidered sun (the symbol of the young Christ), and, on its side, the symbol of the Holy Ghost, a dove of pearls and rubies (picture 4).

In comparison with the earlier specimens of similar hats preserved in Vienna (offered by Pius V, 1567, and by Gregory XIII, 1581, to the Archduke Ferdinand of Tirol) the hat of Sobieski has a peculiar feature: the brim put down and cut in two at the front and back. It could have been regarded as a later change but for the testimony of another example which has survived until our time but in iconographic form. This is the hat sent (together with a sword) by Klement XI to Prince Eugene of Savoy in 1716. The brim of this hat was similarly cut and put down, and was also decorated with ermine tails. Presumably it represented the last stage in the evolution of this object since the 14th century.

The political decline of both countries, Poland and Italy, particularly poignant in the second half of the 18th century, hindered the traditional import of military works of art. Only during the 19th century, with the establishing of modern museums in Poland, did a number of distinguished specimens of Italian arms and armour come to this country from abroad or they were retrieved from forgotten stores.

Thus we find an interesting group of objects in the most ancient Polish historical museum, founded by Princess Czartoryska in Puławy, and which is now a department of the National Museum in Kraków. In 1811 Czartoryska acquired in Belgium, with the help of her artistic agent, a superb example of the Italian rondache, embossed and damasceened, representing an episode from the Trojan War, the combat between Menelaos and Hector over the dead body of Pa-trocles (pictures 5-6). 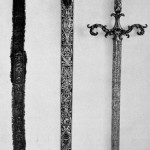 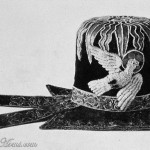 She then succeeded in obtaining from the Arsenal of Brussels a number of remarkable objects of Italian provenance, these included a magnificent vambrace of jousting armour from about 1500 (picture 7), some fragments of a great suit for horse and man attributed to the Archduke Albrecht of Netherland c. 1599 (pictures 8-9-10), a fragment of knight’s parade saddle and a morion in the style of Lucio Piccinino (picture 11). Probably from the same source originated the other outstanding morion, the work of Pompeo della Chiesa. There survived also in the Czartoryski Armoury some excellent examples of Italian side- and firearms (pictures 12-13). 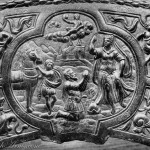 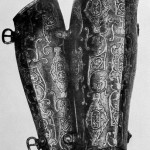 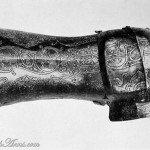 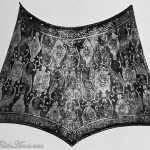 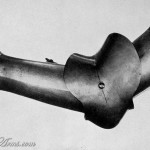 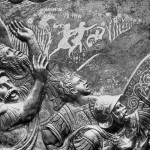 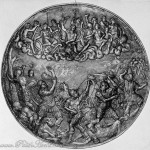 We should still consider for a moment some interesting (unfortunately incomplete) Italian armour with overlapping horizontal lames, called animes, «animae», preserved in the above-mentioned collection (pictures 14-15). C. Blair, describing that type of cuirass, designated 1530 as the year of its appearance. Several animes have been preserved in the Museum Stibbert in Florence, some cuirasses in the Musee de l’Armee in Paris and in the Tower of London; the most outstanding and complete example, attributed to the Venetian admiral Agostino Barberigo, c. 1560, is in the Imperial Armoury in Vienna. The anime was constructed to secure greater freedom of movement than the heavy plate suits permitted. It is not improbable that the animes were known and used in Poland, the more so as the Polish national type of armour, destined for the half heavy cavalry, «husaria», was very close in conception to that Italian invention. 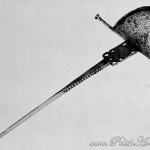 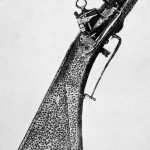 Sporadically there are to be found some objects of Italian arms and armament in other Polish collections, in the National Museum of Warsaw and Poznan, and before all in the Museum of the Polish Army in Warsaw. In the latter the attention of a connoisseur may be attracted by the fine rondache with the representation of the legend of Horatius Codes (picture 16), and the bronze model of the cannon (picture 17), with the coat of arms of the Medici and the head of an apostle at the back, which is undoubtedly in some way connected with the famous cannon of St. Paul of Bargello in Florence (picture 18). 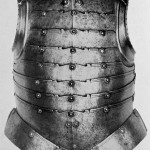 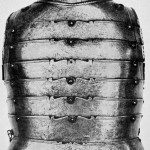 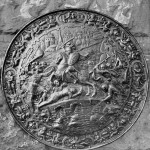 Finally we are obliged to repeat once more that the facts and objects here described may be considered only as an introduction to the large and interesting problem of the Italian arms, armour and military marks of honour known, used or collected in Poland. Perhaps they will give an impulse for future and more fruitful research.