Polish arms are quite rare but still there are some interesting objects on auctions in the World. Most of them you can find in European auction houses, and sometimes their prices are very high. I came across few very interesting Polish weapons lately, and I decided to share some simple thoughts about them, to give some perspective of what you can expect searching for some central European armament for your collections. 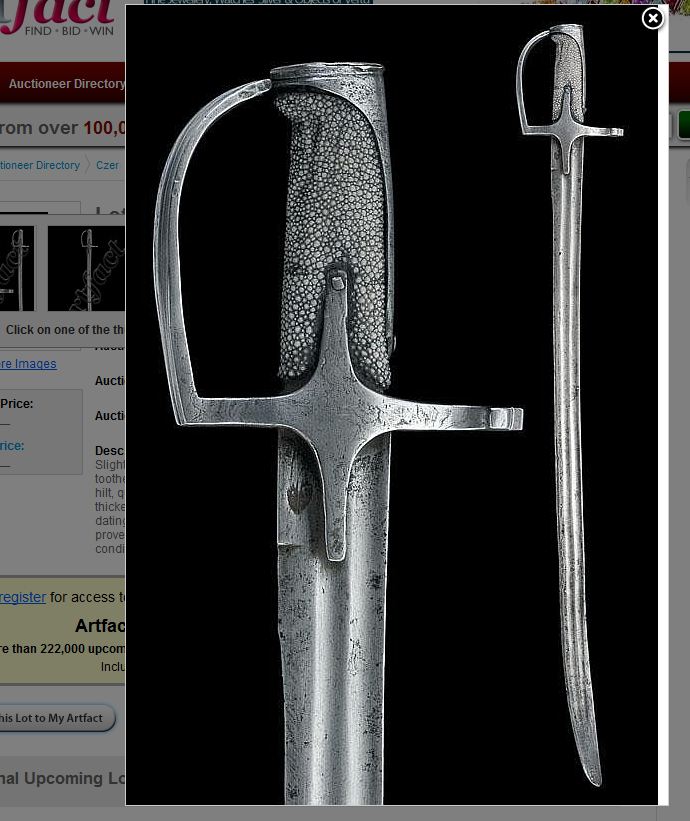 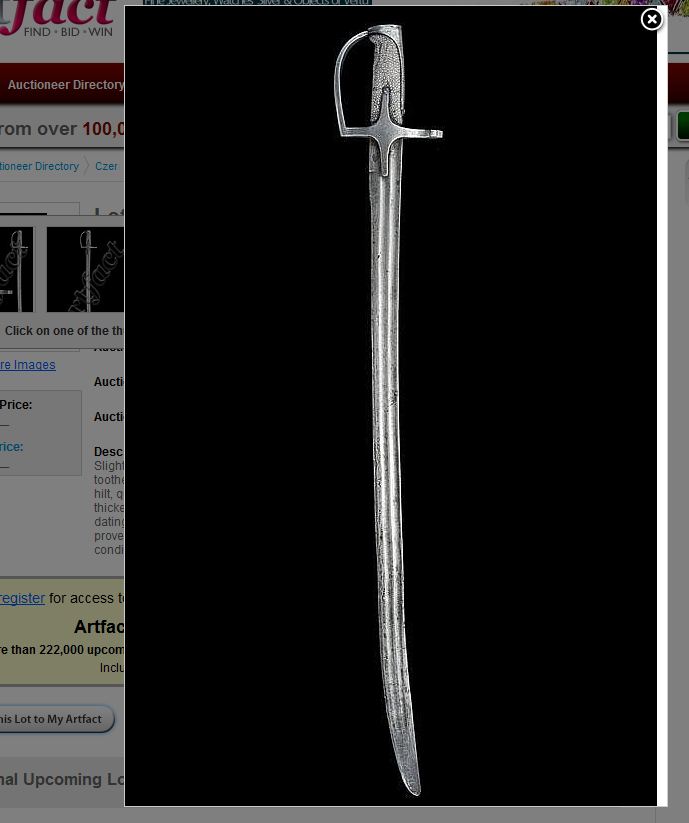 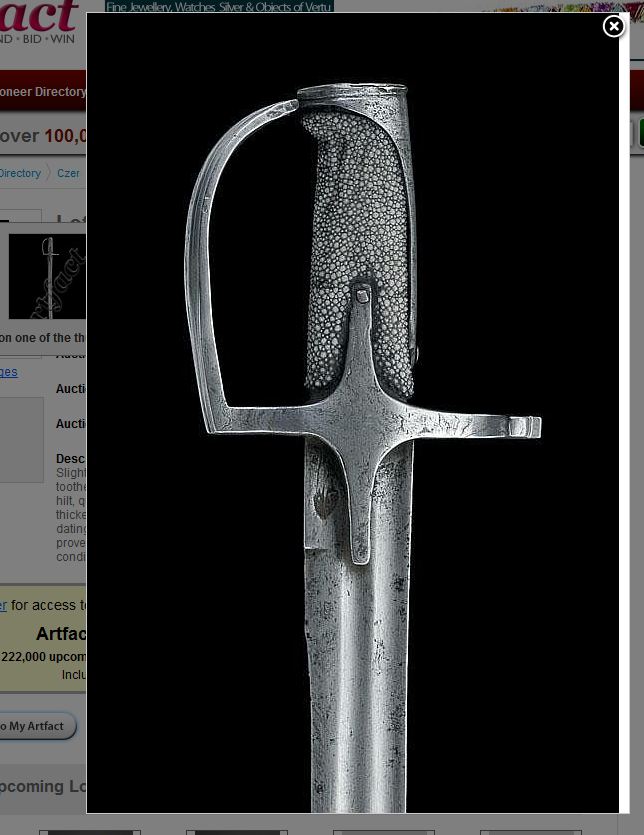 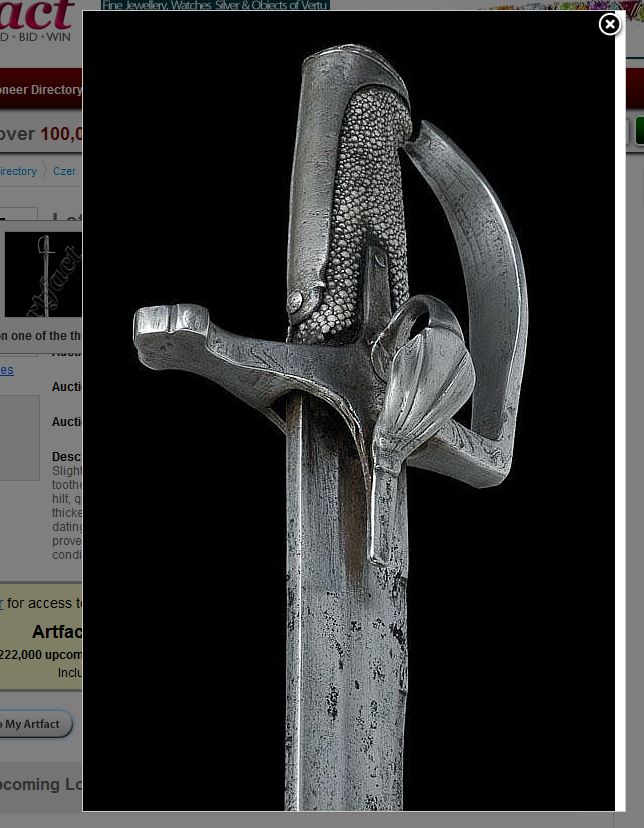 The most famous and one of the rarest kinds of Polish sabres appeared on Italian market. It could be. The Polish hussar’s sabre was famous because of its technical parametres and special design, and very often is called the best Polish military invention of modern times. It didn’t last for long at the side of Polish hussars, because of some political and historical storms, but is for sure the one that inspired other European sabres from the biginning of the 18th century.

The one from the past auction is quite unusual.

This is what the auction description says:

First thought – the Polish hussar’s sabre was often called “The Black Sabre” because of the dark leather covering the grip and scabbard, but this one is in beautiful silver/metal color, including shagreen leather on the hilt. Such a change is quite possible, and I wouldn’t pay too much attention to the “Black sabre” legend, as we know some great hussars sabres with silver-band braiding on the hilt, and we just don’t know if every scabbard was black as they have not survived to our times.

The hilt and its construction is perfect, with knuckle-guard running to the top of the hilt but not touching it. There is also a thumbring, another characteristic part, very important in many hussars sabres, as the fighting technique depended on this small addition.

Blade is under a question mark. It doesn’t look like classical hussar’s sabre blade. Seems to be short, the curvature is very small, but, as description says, it has some marks on it, and I must admit, the crossection seems to be fine for the 17th/18th c. sabre. Anyway, I wouldn’t rule out some combination of the hilt with blade from different weapon.

I cannot answer question is it original one. There is nothing wrong from the picture with this one, but I saw very good fake sabres on my own eyes, with very small differences between them and the original ones. So beware! 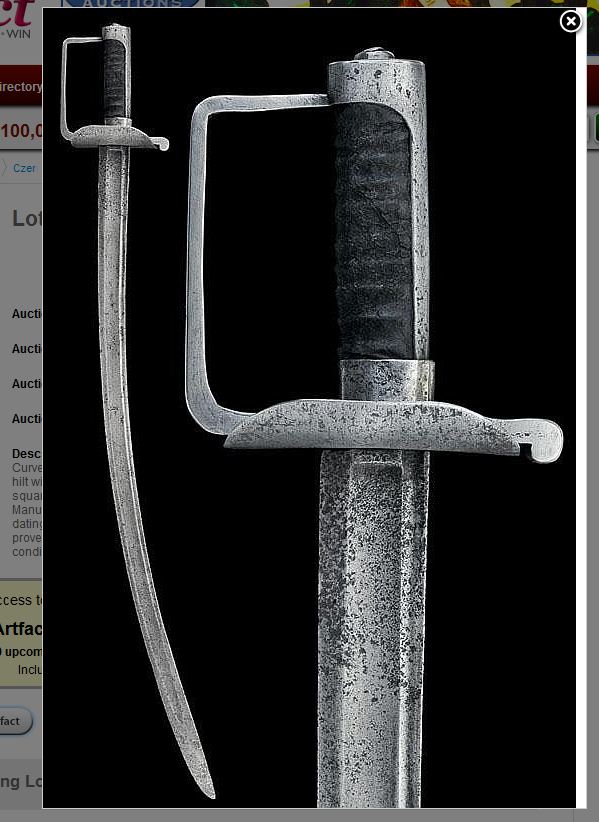 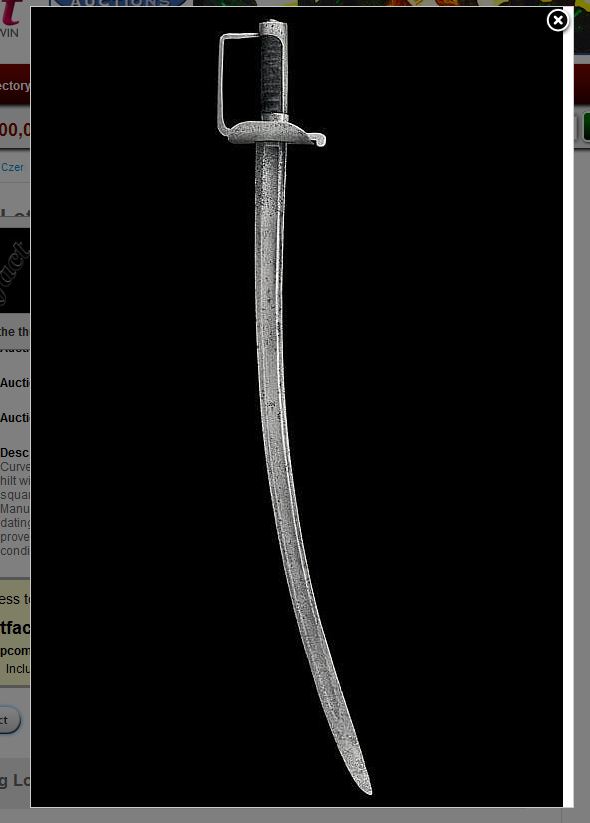 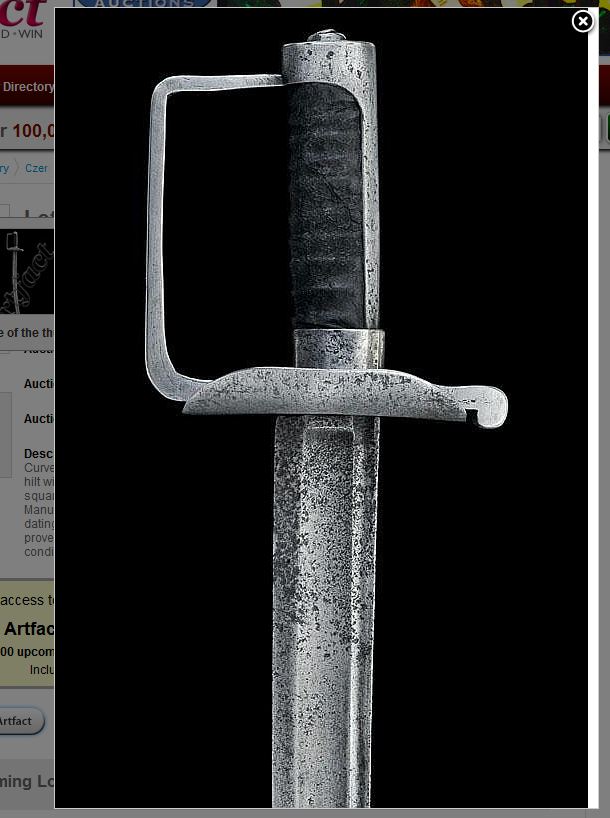 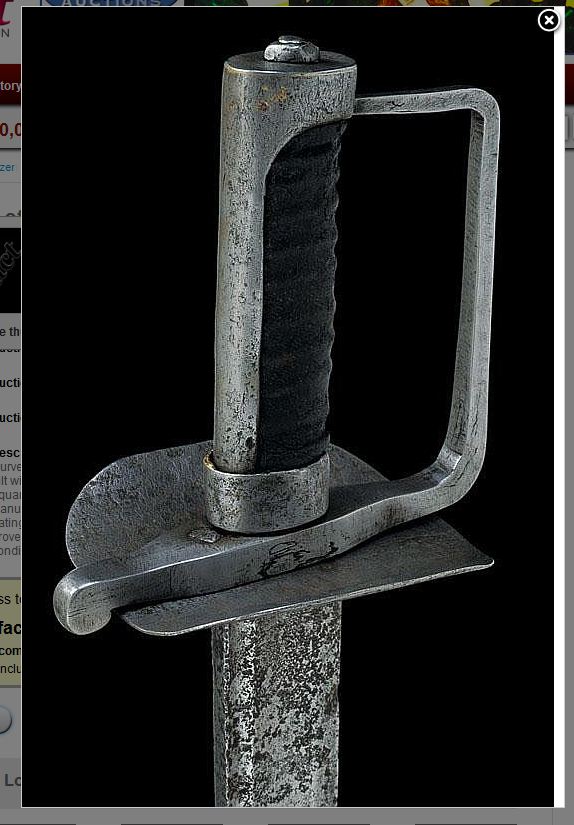 Another rarity. Actually there aren’t many sabres of this type. This is a kind of modification for the National Cavalry sabre used in the 2nd half of the 18th century in Poland and Lithuania. It took its name “kościuszkówka” from the general Tadeusz Kościuszko (the same who is famous in USA), who has similar sabre in his hands on many portraits of him, as a leader of Insurrection against Russia (1794 y.)

Description from the auction:

It seems to be very good sabre. But what I see suspicious, but cannot tell from the pictures with more confidence, is the corosion on metal elements. Both sabres, this one and the hussars one, doesn’t look good but it can be because of artificial sharpening used on the photos, I don’t know. The question is: if all metal elements of the sabre are with strong corrosion signs, then why the leather on the grip is in almost perfect condition (as far as we can see it)? There is a popular way to make the metal look old, treating it with acid, with which false corrosion is made. And from what I saw, it is hard to find a sabre with complete leather on the grip. I believe all doubts can be easily solved with the direct examination of this object. 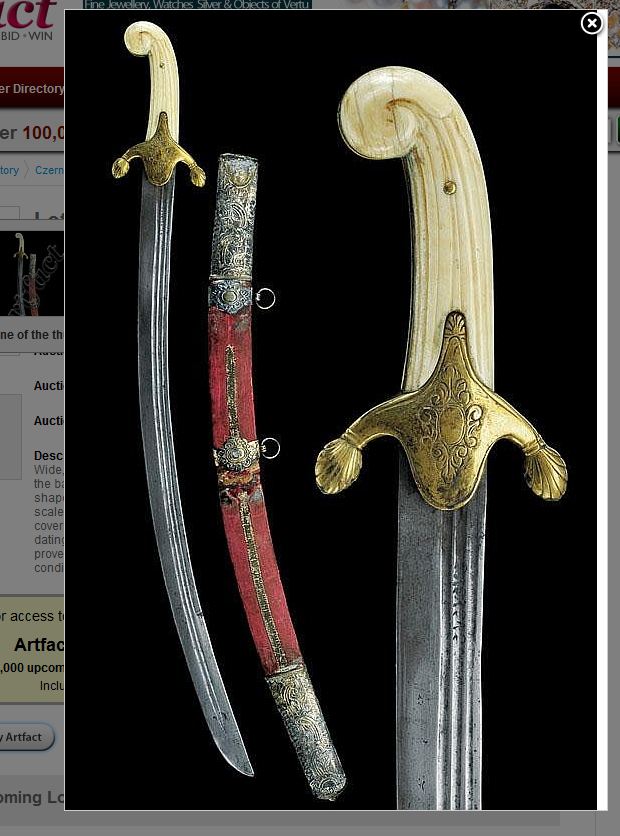 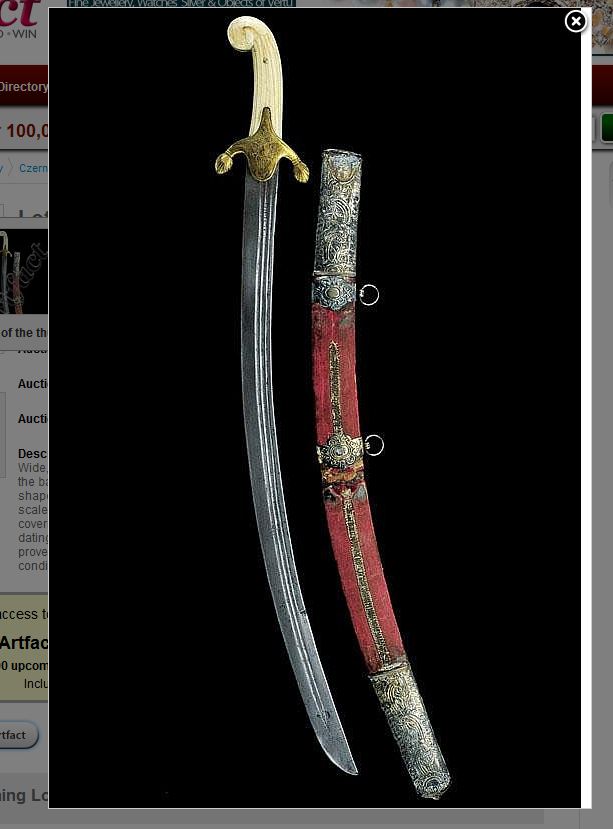 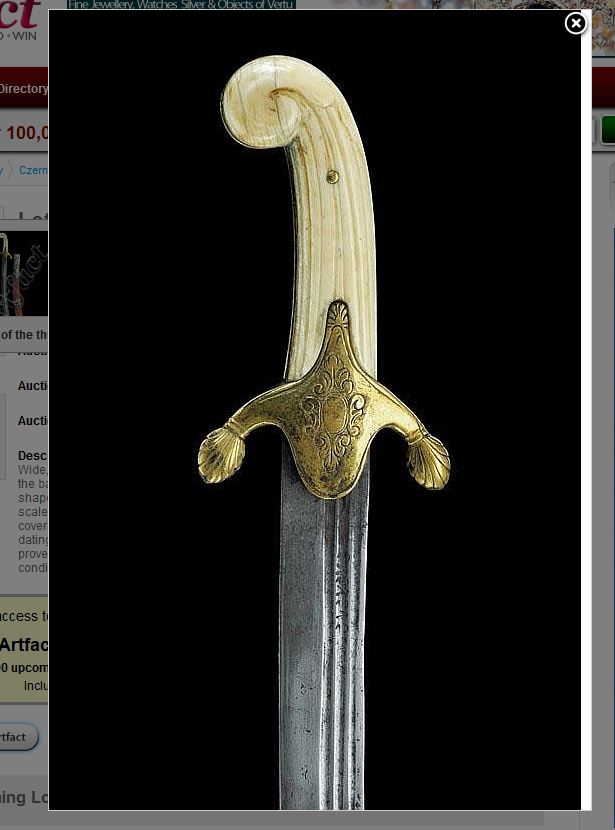 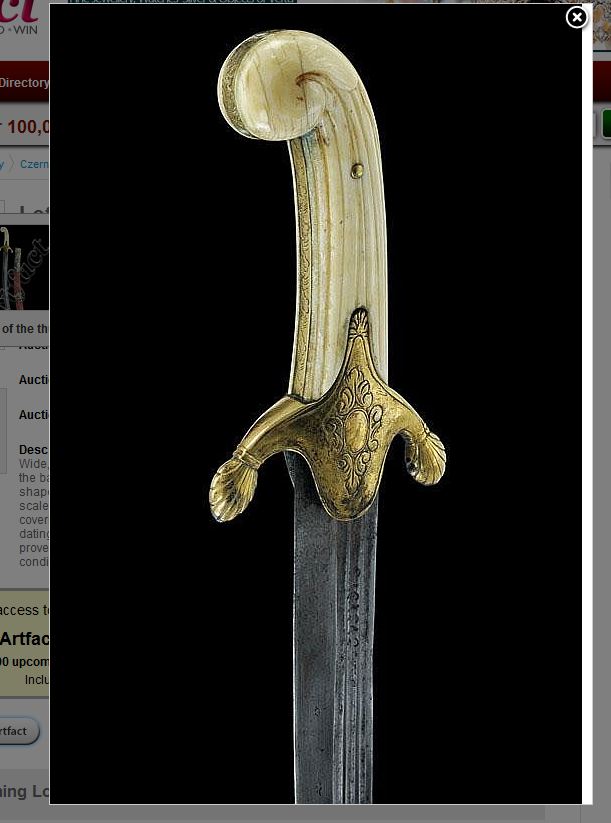 This sabre is quite bizzare. Actually there is no proof it Polish. It is very often, that unusual sabres, with some Oriental features or look, is attributed to Poland.

Description from the auction:

What we can see here is quite usual European blade, probably older then the hilt and scabbard. The quillons and the shape of the hilt may resemble some Oriental sabres like Persian or Turkish kilij with bulky pommel at the top. But at the same time, we can see European engraved decoration on the hilt.

It is not unusual in the 18th c. Europe, to take eastern types and create something new around them. We have many examples of hangers or sabres in France in 2nd half of the 18th c. made this way. There were also Chinese inspirations and later, when Napoleon took the Egipt, North-African ones. It is, of course possible, that this sabre was made for Polish nobleman, but in my opinion, this is not the only one and not the strongest one possibility.