(quoted from The Journal of The Arms and Armour Society, vol. VIII)

Staff weapons generally, and war hammers in particular, receive very little attention from historians of arms. They were never employed so universally as swords or daggers, and after the beginning of the XVIIth century went practically out of use in Western European countries. On the other hand, in Central and Eastern Europe, and in Poland and Hungary in particular, they remained very popular throughout the XVIIth century and were still in general use in the first half of the XVIIIth. No doubt oriental influence played a decisive part in this matter. In fact the shape and the decoration of many Polish – and even more so Hungarian – war hammers point to a Middle Eastern origin, whilst the etymology of their names provides additional proof of this.

The continuous use of these weapons and their popularity led to the formation of distinctive types, different not only from Medieval and Renaissance West European war hammers but also from later Turkish and Persian ones. Unfortunately, the literature on this subject is almost as scarce, and inadequate in Poland as it is in England or France. No authoritative work dealing exclusively with it exists, and general books and publications on arms and armour give only brief, often fragmentary and loosely documented, information.

In the Middle Ages, and later, until approximately the middle of the XVIth century the war hammers used in Poland were of German or Italian style. But towards the end of the XVIth century distinctive local variations were created. They consist of three types known as: czekan (Hungarian czakany), nadziak and obuch. It should be pointed out that clear distinction among these types and accurate use of the names developed only with time. In the late XVIth century and early XVIIth century the names, in particular czekan and nadziak, seem to be used indiscriminately, even in official documents such as “the constitutions”, i.e. the laws passed by the Polish Sejm (Parliament). Anyway, at least towards the middle of the XVIIIth century, and probably much earlier, the distinction was well established and generally accepted. In the fundamental work of the Rev. Andrzej Kitowicz: Opis obyczajów za panowania Augusta III (“The description of customs under Augustus III”) all three types of the Polish war hammer are clearly described and classified. Dziewanowski, who does not mention Kitowicz while describing war hammers in his standard book on Polish arms and armour, adopted a similar classification.

Czekan. Originally a Turkish word, which found its way into Polish probably via Hungarian is already mentioned in Knapski’s dictionary of 1621. Its metal part consists of a hammer-head (usually with a square face) on one side and an axe with a short, slightly curved blade on the o t h e r . A good example of a czekan, typical in its construction although richly decorated, once belonged to king John-Casimir (1648- 1668) and was later part of the Krasiński family collection.

Nadziak. This was by far the most popular of the three types: the name is directly borrowed from the Turkish, despite its apparent, misleading “Polish” clang: the verb “nadziać” means “pierce with something . . .”. Its hammer-head (usually with a square, but sometimes with an hexagonal face) which has a moulded neck, narrower towards the centre of the weapon, is balanced on the other side by a slightly drooping beak, usually long, often fluted, as in the example No. A 977 in the Wallace Collection . But there exists another type, less common, in which the hammer-neck and the beak form almost a straight line, of more or less equal thickness. The beak is shorter and its point is formed by cutting off the top side at an angle. An example from the National Museum in Cracow represents this group well. The “nadziak” of Rembrandt’s Polish Rider belongs to this category. 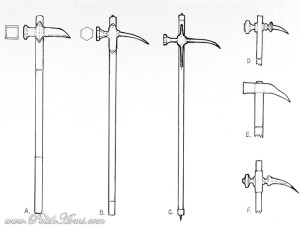 Obuch. This name is purely Polish and of great age. Originally: “the blind end of an axe”, but already at the beginning of the XVth century it meant “a [unspecified] war hammer”. Later on it came to be used to describe a definite variation of these weapons (i.e. war hammers), similar to nadziak, the hammer-head on one side and the beak on the other, but the beak is curved to such a degree that its end points towards the haft. Dziewanowski remarks that such an object could hardly be used as a weapon but rather as a decorative walking-stick. The same author adds that the name “obuch” was also used for a type of nadziak with the beak curved sharply downwards and up again at the end, in the shape of an horizontal ” S ” . In a set of fourteen drawings by the Florentine artist, Stefano della Bella, depicting the entry of the Polish Embassy to Paris in 1645, the obuch is represented three times. 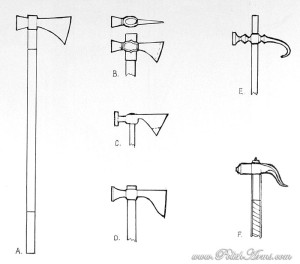 Polish war hammers differ in all the three variations from both Western and Eastern ones chiefly in their hafts. These were always made out of hardwood and were considerably longer than those used in other countries. They were used on horseback and on foot alike, not only as weapons but also as w a l k i n g – s t i c k s . Usually, but not always, the haft projects above the head for approximately the same length as the hammer part of the head. Sometimes the haft is finished at the top and the bottom with a metal cap as in the example in Wallace Collection A 977, but more often the wood is covered with a silver or plated “sleeve” up to nearly a quarter of the length from the top and the bottom, but usually less. The remainder of the wood is covered with leather or, more commonly, with velvet. 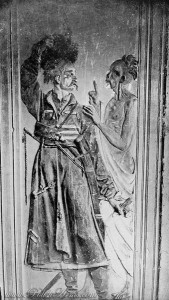 War hammers, in the variations described above, were very popular in Poland for over two centuries, from the middle of the XVIth to the second half of the XVIIIth. In fact, they were a favourite weapon of the Polish nobility in war or peace time, next only to the sabre. They were also regarded as a particularly dangerous weapon. Three times -in 1578, 1601, and 1620 – laws (“constitutions”) were passed by the Sejm, (the Parliaments) forbidding their use except “in war against the enemy of the country”, and introducing heavy penalties, but all in vain.

As for reasons why war hammers were so dangerous and for the assessment of their popularity, the best thing is to quote the Rev. A. Kitowicz: “When a nobleman was leaving the house he would buckle the sabre to his side and take an ‘obuch’ in his hand, an instrument which was also called ‘nadziak’ and ‘czekan’. It consisted of a haft, one inch thick and waist-high; the handle was round and elongated made of silver, plated or plain brass, and with a hammer on the other side, made of steel, silver or brass. This hammer had a hammer-head similar to the shoemaker’s; if on the other side it was formed into the shape of an axe, it was called ‘czekan’, if it was in the form of a thick, slightly sloping spike, it was called ‘nadziak’, and if curved like a round cracknel, then ‘obuch’. 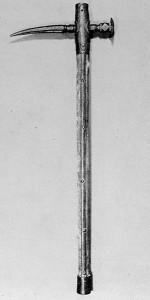 “It was a terrible instrument in the hand of a Pole, and particularly so when he was in the mood for quarrels and scuffles. With the sabre one could cut off somebody’s hand, cut the face, injure the head, and the running blood of the adversary would calm down the rancour. But with the obuch one could cause a deadly wound without even seeing the blood, and – not seeing it – he would not calm down instantly, but would strike several times without cutting the skin, breaking ribs and bones at the same time.”

“The nobleman walking with an obuch often injured his serfs and sometimes even killed them. Because of the danger it represented it was forbidden to come armed with a nadziak at the time of big meetings, sessions of parliament, sessions of the local councils or tribunals where scuffles were common. At the entrance to the Gniezno cathedral there is a fixed notice warning people whosoever would enter this house of God with such a brigandish instrument he would be excommunicated. And indeed it was a brigandish instrument for if someone should hit somebody else with the nadziak’s sharp end behind the ear he would kill him instantly, pushing through his temples a fatal iron.” 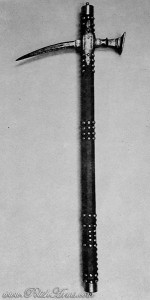 This colourful though slightly horrifying account not only describes the Polish war hammer, but also explains its singular role in Polish life and customs of the time. And Kitowicz should well have known, as – before becoming a priest – he was an officer in the Army and for many years took a very active part in public life.